We have a Redline exclusive for you today! We've found a copy of correspondence showing that Iran's Ministry of Defense has delegated its radiation safety responsibilities to SPND (سپند) - the notorious organization led by Mohsen Fakhrizadeh, the head of Iran's pre-2003 nuclear weapons program.

Our analysis of the correspondence, which you'll see below, shows that SPND is now running the radiation protection efforts of the Ministry of Defense and Armed Forces Logistics (MODAFL or وزارت دفاع و پشتیبانی نیروهای مسلح). That means ensuring the safety of MODAFL workers using man-made sources of radiation, like iridium-192 or cobalt-60 used in non-destructive testing. And if - perish the thought - MODAFL was to hold any uranium - depleted or enriched - thorium, or plutonium, it would also mean monitoring any workers using those materials.

It's a big job that SPND has taken on with this role. Iran's military reportedly has over 25,000 employees who are classified as "radiation workers" - that is, routinely exposed to radiation in one way or another during the course of their service. There are probably at least a few hundred of these military workers who work in the facilities run by MODAFL, which is responsible for defense industrial production, but doesn't control the army, navy or IRGC. SPND will have to make sure that these workers are all safely protected from radiation - and we're not confident about that, given SPND's past history with radiation safety screw-ups...

It's also a role that brings with it extremely high risks of exposure for SPND's covert activities involving nuclear-related research. We bet the International Atomic Energy Agency will be very keen to visit SPND's Office of Radiation Safety Coordination in order to ensure that all recorded nuclear material on the books (like depleted uranium used in portable non-destructive testing devices) is under IAEA safeguards. SPND will have some awkward footwork to do if they want to dodge that.

In the meantime, here's the evidence that the IAEA and others will want to see that shows that MODAFL's Office of Radiation Safety Coordination (aka ORSC or دفتر هماهنگی ایمنی پرتو) is run by SPND. Below is a redacted version of the correspondence that we've obtained, with the important text translated: 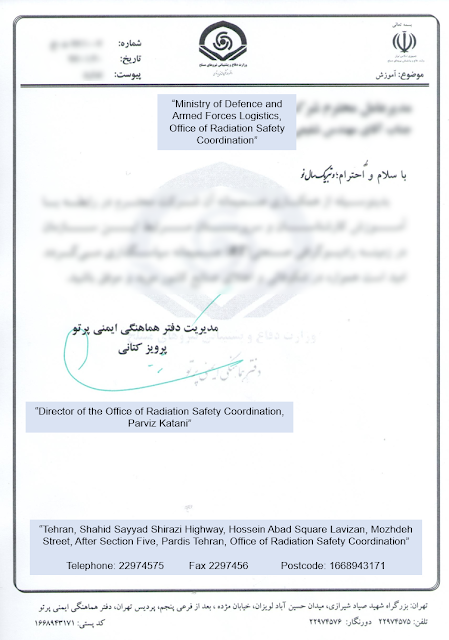 ORSC doesn't explicitly state there that it's run by SPND - that would leave it open to sanctions. Stupidly, though, there are bleedingly obvious clues on that letter that the ORSC is actually SPND to the gills.

The first clue is Parviz Katani (پرویز کتانی), listed there as head of the ORSC. There's only one person named Parviz Katani who is involved in radiation safety work in Iran, and that man is a senior member of SPND. How do we know that? Erm, because he told us. This 2018 conference paper by Katani, on protection of military vehicles against radiation, explicitly states that Katani's affiliation is SPND - as is that of one of his co-authors, Behzad Ahadi Bileh Daragh (بهزاد احمدی بیله درق, national ID 1463260431): 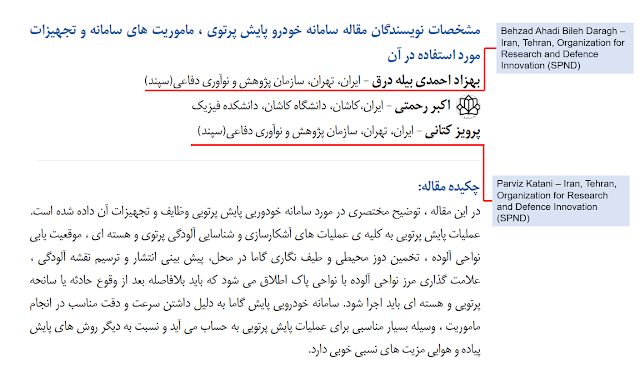 That conference paper proving Katani is SPND certainly ain't a one-off. Here is another paper by Katani under SPND auspices. Here's another one. And another. You get our point.

Indeed, we know that Katani has a long past in SPND circles - and it's something of a checkered one. Back in 2003 he was a member of the Institute of Applied Physics (انستیتو فیزیک کاربردی), a notorious front for Iran's AMAD nuclear weapons program. Under those auspices he supervised the postgraduate thesis of an IAP radiation specialist named Shahram Amiri (شهرام امیری), who would go on to defect to the United States, then re-defect back to Iran - and then was executed by Iranian authorities as an alleged spy. Katani, as Amiri's supervisor, probably had some explaining to do to Iranian counter-intelligence authorities after that incident.

Katani also moonlighted for a while in about 2013 as an employee of the Novin Medical Radiation Institute (انستيتو پرتو پزشكي نوين), an SPND spin-off that tried to parlay SPND's expertise in radiation technology into selling expensive cancer treatment to wealthy Tehranians.

Now - with that correspondence - we know that SPND's very own Parviz Katani is head of the ORSC, at least as recently as mid-2018, when the letter is dated. That's a very good indication that SPND itself is running the ORSC.

The other evidence that the ORSC is now part of SPND is the organization's address, as listed on that correspondence. It's given as "Shahid Sayyid Shirazi Highway; Hosein Abad Square; Lavizan; Mojdeh Street; Subpart 5; Pardis Tehran; Office of Radiation Safety Coordination".

That's an infamous location for Iran-watchers. Mojdeh Street, as we've noted in a recent post, is a facility that's been owned by SPND or its predecessors since the early 2000s. This facility is also known as the "Pardis Tehran" office of Malek Ashtar University, according to no less an authority than the IAEA, and Pardis Tehran is a name that SPND still occasionally uses as a half-hearted cover.

In case you think we've photo-shopped that address on the letter, you can find much the same incriminating information here, on the website of the Iran Nuclear Regulatory Authority, which is part of the civilian Atomic Energy Organization of Iran. That link goes to a list of centers that are nationally authorized to conduct training in radiation protection
(مراکز دارای مجوز برگزاری  آموزش حفاظت در برابر اشعه), and the ORCS at Mojdeh Street is indeed one of them. Here's a grab of the key text, with our translation:

Good luck to SPND with this whole military radiation safety endeavor. We're crossing our fingers that SPND won't lose MODAFL's list of sites where nuclear and radioactive material is stored in the same way that SPND lost that Atomic Archive thing.

And for those poor radiation-exposed workers in MODAFL who now have to rely on SPND keeping them safe - well, we're sorry for you.