- February 28, 2020
Are you struggling to find the smoothest, most perfectly spherical balls? Iran Redline feels your pain! And apparently so too does SPND (سپند) - the hapless Iranian defense research organization with a penchant for nuclear weapons - because SPND's latest business venture involves solving exactly this problem.

It's not hard to tell which of these guys is the bigger fish in the SPoND, as Dr Saeed Borji has tastefully named the company after himself: say hello to the Azar Afrouz Saeed Engineering Company! In Farsi, they're known as شرکت فنی مهندسی آذر افروز سعید. We'll call them AASE for short, because really they're not very aaace at all.

But they do have the big balls.

Get your mind out of the gutter! We're talking about these things: 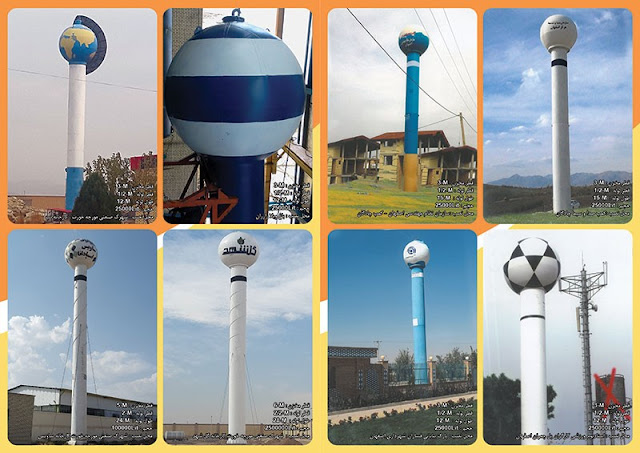 It's the giant balls you never knew you needed! Thank goodness for AASE: for all of your over-engineered water tower or giant novelty golf-ball-on-a-tee needs, they have you covered.

But what does this have to do with nuclear weapons, I hear you ask? Read on!

There's actually some clever engineering behind these giant spherical balls. As a video about AASE from Iranian television shows, the balls are made of metal ribs, welded latitudinally to make a roughly polygonal kind of structure. To make that polygon into a sphere, the steel shell is then filled with water, and an explosive charge is detonated in the center. The explosion creates a symmetrical internal pressure wave of water that pushes out the welded polygon into a nice smooth sphere.

The scientific processes involved here are really quite similar to those involved in developing a nuclear weapons implosion system, albeit with much less complexity and a lot more room for error. Regardless of whether you're developing a nuclear weapons implosion system or building the perfect spherical tank, you'll be using engineering methods like finite element analysis to study the behavior of fluid under pressure to ensure symmetry of blast waves.

And that, dear reader, is why SPND is in the giant steel ball game. It's a nice cover to enable research in dual-use, nuclear weapon-relevant areas while making a bit of money on the side! Maybe. If the giant ball market takes off.

Speaking of making some money on the side, let's get back to Dr Borji.

The man, the myth, the Borj

Dr Saeed Borji is one of Redline's favorite SPND alumni.

While he doesn't shy away from touting his academic achievements, Borji is notoriously publicity-shy. You'll find no photograph of him on his ResearchGate page, nor anywhere else on the internet as far as we know - until now.

That's why we were shocked to see Borji interviewed on Iranian television in a promotion for AASE's spherical tanks. Here he is: 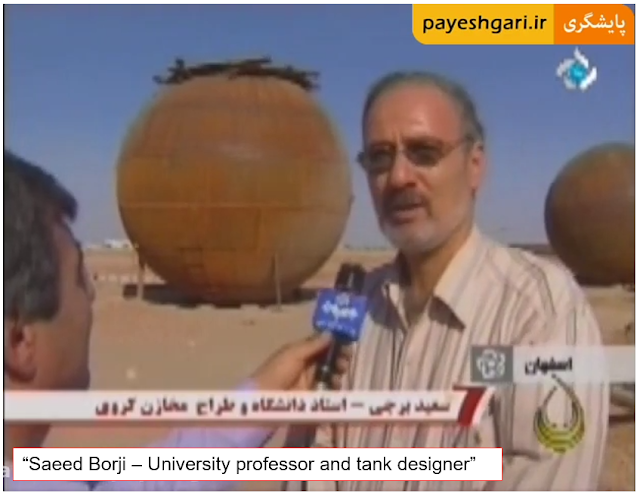 And for reasons unknown, AASE has decided to put out several photos of Borji and his fellow ballers. We've annotated the one below: 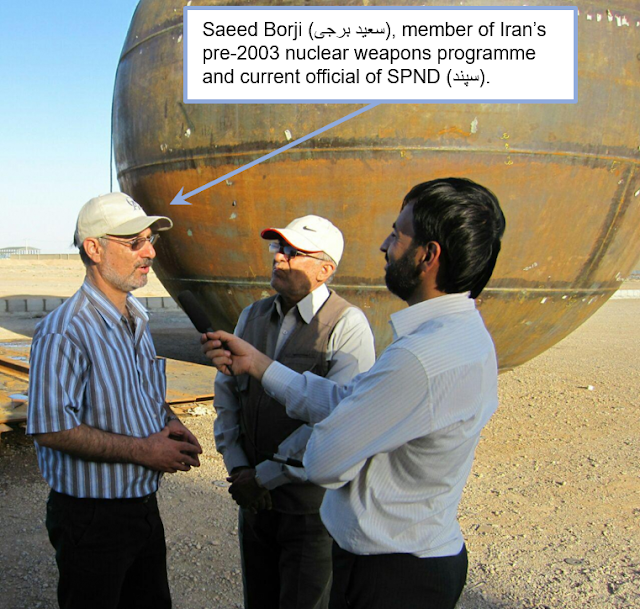 Is that a Giorgio Armani hat? Nice!

What's Borji's connection to SPND? First of all, he's an Amad Man - that is to say, Borji was a member of Iran's pre-2003 nuclear weapons program, as has been made clear by the Atomic Archive material nabbed from Iran by the Mossad.

And not just any member: Borji's involvement in Amad was central, and extensive. As the ISIS institution has noted, Borji was involved in explosive experiments for nuclear weapons at the notorious Parchin site. The NCRI has gone much further, stating that Borji was actually responsible for the design and construction of the two explosive chambers at Parchin that the Amad team used for implosion-related experiments, and that Borji worked closely with Amad's hired-gun Ukrainian experts, Vyacheslav Danilenko and Vladimir Padalko, on systems intended for nuclear weapons. 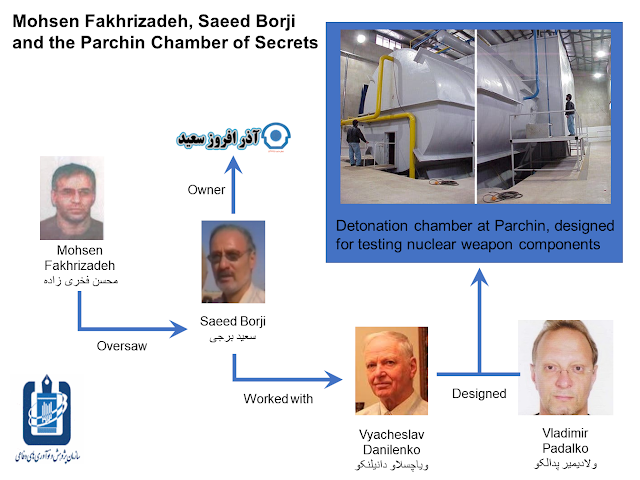 Other information available to us makes very clear that Borji is still tied to SPND. According to the US Treasury, as of March 2019, "Sa’id Borji is an explosives and metals expert for SPND’s Shahid Karimi Group who has assisted SPND’s efforts to procure equipment used for containing explosions." (Shahid Karimi is "an SPND subordinate group that works on missile and explosives-related projects for SPND").

With Azar Afrouz Saeed Engineering bearing Borji's first name, Borji is almost certainly the driving force behind the big balls company. But he's not the only interesting employee. Here are the others!

AASE's website states that Mohammad Reza Heydari
(مهندس محمدرضا حیدی - aka Mohammadreza Heidari or Mohammad Reza Heidari) is one of the company's experts in metallurgy and quality control, with an MSc in materials science.

What they don't tell you is that Heydari is another SPND old hand. In 2014, Heydari was outed as an SPND employee and a member of SPND's metallurgy department. We don't think that he's strayed far from this role in the meantime.

The rest of AASE's staff are cut from the same cloth. There's Dr. Abdolreza Soltanipour
(دکتر عبدالرضا سلطانی پور), a metals expert from Malek Ashtar University (دانشگاه مالک اشتر). Not by coincidence, the military-owned Malek Ashtar is also where Dr Borji has spent a bit of time working on thinly-veiled nuclear weapon-related experiments, including on nanodiamonds - a favourite cover topic of Dr Danilenko's for nuclear weapon-related research.

There's also Engineer Ali Hashemzadeh (مهندس علی هاشم زاده), a welding maestro and specialist in design and engineering of giant balls. Hashemzadeh was formerly doing exactly this for another company, Saman Makhzan Jey, or Saman Tank Engineering Company. We suspect that AASE might have taken over Saman Makhzan's Esfahan manufacturing location, as it's pretty unlikely that there is that much demand in the city of Esfahan for giant smooth balls.

No more balls, we promise

And that's it for today. Frankly, we're a bit disappointed that the formerly mysterious Saeed Borji has gone public with Azar Afrouz Saeed Company, and can't help but feel that Iran's security apparatus will be equally sad that Borji has chosen to hit YouTube. Then again, that's a common theme with SPND members, who want to live in the shadows but also rake in cash. They can't have it both ways.