We can't believe our luck today here at Iran Redline. The world's most elusive entity has been caught on camera!

No, not the giant squid filmed in the Gulf of Mexico, although that's quite good too.

Rather, we've found video footage of Iran's most notorious individual: Mohsen Fakhrizadeh
(محسن فخری زاده or محسن فخری زاده مهابادی), head of Iran's pre-2003 nuclear weapons program, and the man most likely to lead any resumption of such work should Iran make good on its former threats to leave the nuclear Non-Proliferation Treaty (NPT).

Today, we're pleased to point out the first video of Mohsen Fakhrizadeh that (to the best of our knowledge) has ever been released in the public domain. Taken in January 2019, the video footage shows Fakhrizadeh taking part in a meeting with Iran's Supreme Leader, Ayatollah Ali Khamenei (سيد علی خامنه ای), and members of a governmental neuroscience coordination body called the Cognitive Science and Technologies Council (CSTC or ستاد توسعه علوم و فناوریهای شناختی). It's Fakhrizadeh in the wild!

But he's not easy to spot. Indeed, you'll need all of those skills that you learned from Where's Waldo to Find Fakkers.

Let's dive into the footage and how we found the man behind the AMAD plan.

Just another day with Khamenei

Iran Redline feels a bit sorry for the medium-level flunkies of the Iranian regime. Turning up to hear the Supreme Leader talk at any event, regardless of topic, tends to fall a bit short in the enjoyment factor compared to staying at home with some nice tea and an HBO boxset.

The CSTC event where we spotted Fakhrizadeh was no exception. Participants were treated to a twenty-minute speech by Khamenei, along with some inspiring comments from Iran's science minister Surena Settari (سورنا ستاری), who was doing his level best to look like he was actually enjoying himself.

With Khamenei sticking to his usual themes of Iran's resistance economy; the need to counter western cultural infiltration; etc, etc, not all in the audience were managing to maintain the right facial expressions of respectful attentiveness.

There's a fine balance to be struck between a look that says "I'm taking this speech very seriously"... 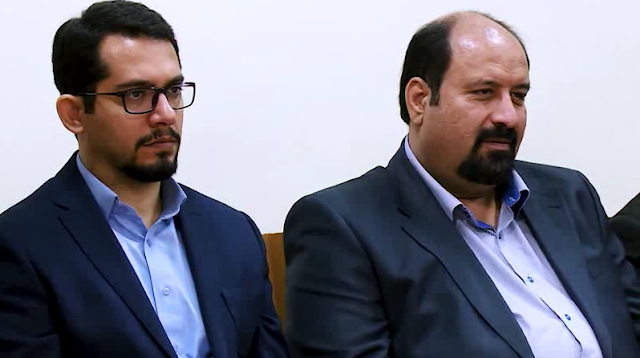 ...and one that's more like "strap me to the back of an Iran Khodro Paykan and pipe those exhaust fumes straight into my mouth."

Thankfully, the cameramen present decided to get reaction shots from almost everybody in the room. And in a blink-and-you'll-miss-it moment, there's a few frames of a man in the back corner trying very hard to cover his face from view:

That's Mohsen Fakhrizadeh! Stuck in the back row seated next to Parviz Karami, secretary of the governmental Headquarters for the Development of Culture of Science, Technology and Economics, and a gentleman who looks rather like laser physicist Hamid Latifi of Shahid Beheshti University in a funky pair of glasses.

Not convinced? Here's a larger still frame from that video: 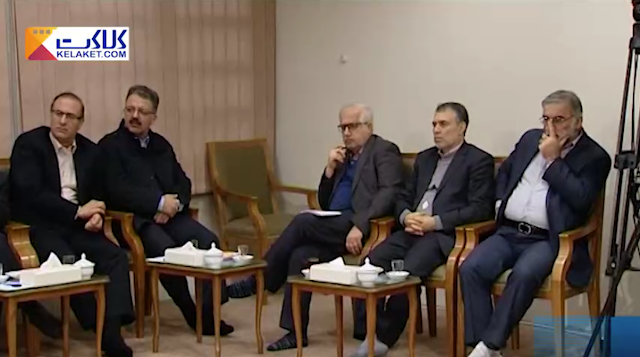 The photographers from the Supreme Leader's office took even better pictures at the event, probably not realizing who they'd included in the shots. Check out this one, with our enhancements: 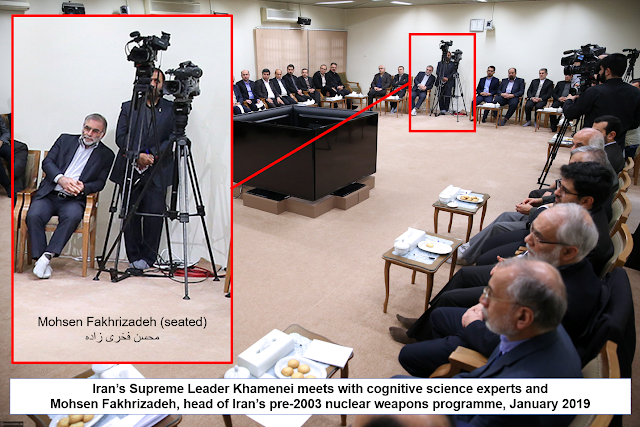 Love those socks. And best of all - another shot, which we've left in its original format: 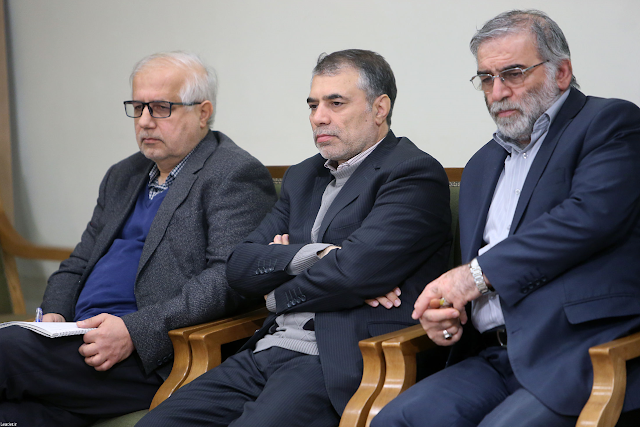 Caught on film - and we're sure he won't be happy about it.

But this post isn't meant to be just be about gratuitous images of the most significant figure from Iran's former nuclear weapons program and ongoing nuclear weapon-related research. There are some lessons to be drawn from this sighting of Fakhrizadeh.

1. He's not toxic for Iran's leadership

The fact that Fakhrizadeh is even in the same room as Supreme Leader Khamenei is significant. You might think that Fakhrizadeh would have been eschewed by Iran's government after his organization, SPND, had its most sensitive papers stolen and published. But if that was the case, then there is no way that he would have been invited to an event like this one. Rather, his attendance confirms that SPND still has levels of support amongst the very top levels of the Iranian political system, despite its poor track record. That is disturbing.

Note how Fakhrizadeh discreetly tries to cover his face in the footage embedded above. Nobody else present at the event does that, as far as we can tell. Clearly, Fakhrizadeh doesn't want to be seen by the cameras, and thus by the public.

We don't think it's too much of an extrapolation to say that this reticence is due to Fakhrizadeh's ongoing involvement in activities that the world wouldn't want Iran to be conducting: the kind of stuff that Iran Redline has been revealing, and will continue to be revealing over the coming months.

No doubt Fakhrizadeh remembers the days of the Amad nuclear weapons program with fondness - and particularly so his football games, which aimed to keep the Amad team happy and healthy. There's probably not so much football going on these days, with Fakhrizadeh looking a little paunchy. He's not quite at Hassan Firouzabadi levels, but those two gold rings and luxury watch of his probably don't slip on as easily as they used to.

We suspect that Fakhrizadeh is enjoying the good life a little too much, courtesy of the money that continues to flow into SPND and then into Fakhrizadeh's rather stretched pockets. Compare Fakhrizadeh now to the old pictures of him looking lean and mean, and you'll probably agree with us on that point.

We'll leave Iran's security apparatus to run an inquiry into how this footage got out into the wild, and look forward to Fakhrizadeh's next accidental public appearance.
Fakhrizadeh