The Atomic Archive has lots of juicy details about Iran's pre-2003 nuclear weapons programme, and provides unparalleled insights into Iran's crash effort to build nukes in the early 2000s. Those analysts who've been granted access to parts of the archive have shown that Iran got much further towards preparing fissile material for use in nuclear weapons than has generally been understood in the public domain. From covert facilities under mountains for uranium enrichment to, erm, covert facilities under mountains for uranium metallurgy, the archive shows that Iran's plan for putting nukes together was real and extensive. And thank God that the Supreme Leader got antsy and pulled the pin on the programme before it went all the way.

Redline can't get enough of these details, historic as they may be. But our absolute favourite aspect of the archive is that it shows - once again - that the Iranian officials at the heart of the old covert programme were, and remain, a bungling bunch of incompetents.

Today we're singling out one of these men (and these fools are, of course, all men) for special praise: Mohammad Mehdi Tehranchi (محمدمهدی طهرانچی - also sometimes written as Tranchi). Tehranchi wins our Amad Man of the Month Award.

It's going to be a challenge, but we'll try and do justice to the amazing buffoonery of Dr Tehranchi, one of the many Amad alumni who have gone on to become pillars of the Islamic Regime.

Today, Dr. Tehranchi is something of a doyen of Iranian academia. He's currently president of the Islamic Azad University, Iran's biggest and most prestigious chain of private colleges. Arguably, it's a more important position than education minister, given the number of students that Tehranchi effectively oversees.

And boy, does Tehranchi love his students! In fact, here's a video from December last year of him allegedly running a few of them over and then speeding away. (In the academic game, that's called effective supervision.)

Perhaps one of those students had tried to remind Dr Tehranchi of his role in the dedicated nuclear weapons programme that ran from about 1999 to 2003, known as "Amad". Tehranchi, as the archive material makes clear, was both a technician and a leader within the Amad programme's structure. Dr T was in charge of one of the Amad subprojects - Project 3/30, also known as the testing group. As part of this role, Tehranchi oversaw the development of key testing equipment for the internals of the planned nuclear device - including something called flash x-ray (or FXR) equipment, which is used to take penetrative images of imploding components to make sure that they are working towards nuclear detonation.

We can't get enough of these images from the Atomic Archive of Tehranchi looking at some of the FXR equipment during an experiment at the notorious Parchin site.

Some would say that those glasses are for ocular protection, but we know better - they're all style, baby. And apparently, the archives even hold some 2003-era selfies of Tehranchi - truly a fashion innovator.

Anyway, once Amad was wrapped up and its key equipment secured for safekeeping, Tehranchi was out of a job. But not for long, thanks to the Amad old boy network! Tehranchi was soon appointed to become the head of Shahid Beheshti University (SBU) by none other than his fellow Amad alumnus, Kamran Daneshjou.Remember Kamran Daneshjou? He was the somewhat incompentent leader of Project 111, Amad's half-baked efforts to integrate a nuclear weapons package into the nosecone of a Shahab-3 ballistic missile, and was then tapped to become science minister after Amad's wrap-up. That these two jokers were parachuted into senior positions in Iran's education sector must have been a little galling to those Iranian scientists who hadn't been working on secretly making nuclear weapons for the past decade. Clearly, the Supreme Leader liked their work.

You might think that Tehranchi would want to hide his time working on nukes in the early 2000s. Alas, his ego prevents that from being the case. Indeed, Tehranchi can't help himself from referring to the Amad era in his official CV, which you can find here.

Buried in that list is an item for the Persian years of 1382-1383 (about 2003-4) that, roughly translated, means "Implementation of a major photonics project of the Defense Industries Research and Training Institute." It's a little oblique, but that's a clear Amad reference. First, the Defence Industries Research and Training Institute (also known as TRIDI, DIRTI or DITRI) is a Ministry of Defence oversight entity that, as the IAEA has noted, also oversaw aspects of Amad work. Second, 2003-4 was the period when Tehranchi was putting together the flash x-ray efforts - and then dismantling it again on the Supreme Leader's orders. And third, "photonics project" is a sly way of characterising the flash x-ray and related diagnostic work that Tehranchi led in Amad. You'd think he could just have said "I was on sabbatical"? Amad officials have never let "being discreet" get in the way of future job opportunities.

What's slightly troubling about all this is that according to Israeli presentations about the archive, in the years after Amad, Tehranchi has remained affiliated with SPND, the defence research entity that inherited Amad's experts and infrastructure. Redline doesn't like the sound of that. It leaves Tehranchi - who is perching near the peak of Iran's government efforts on education - well-placed to help ensure that SPND is supported with resources and talent. But is that enough to keep the ambitious Tehranchi happy in the long term? We have heard that Tehranchi wants more than that. He is clearly manoeuvring himself into contention for the top job at SPND. God forbid that Fakhrizadeh should finally be sacked for his obvious incompetence - but we don't think that Tehranchi would be too unhappy about it.

Do we want Tehranchi at the top of the SPND? It's a thought that leaves us about as happy as the guy in the background of this photo. 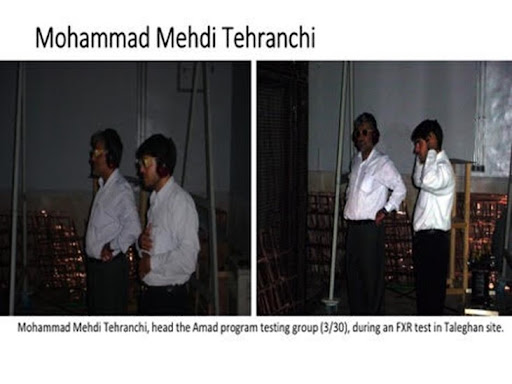