- December 12, 2019
In our last post, we revealed documents showing that in 2016, SPND used the IAP as a nom-de-plume to sign a memorandum of cooperation with Iran's oldest and most prestigious private university, the Islamic Azad University Central Tehran Branch (دانشگاه آزاد واحد تهران مرکزی).

There is a lot of evidence in there that the SPND is behind it. Let’s take a closer look:

First, the document is signed by Dr Rouhollah Ghaderi (روح الله قادری), who is described in the document as the head of the IAP. Here is Ghaderi's signature below on the contract, using a shortened version of his first name:

We know from authoritative sources that Dr Rouhollah Ghaderi (national ID 4579489705) is a long-time, senior official of SPND. In March 2019, the US Treasury put Dr Ghaderi under sanctions for directing SPND's Shahid Fakhr Moghadam Group (گروه شهید فخار مقدم), one of SPND's main research entities. Shahid Fakhr Moghadam has built explosion simulators and radiation and neutron monitoring and detection system for SPND, according to the Treasury.

The second factor that ties the IAP to SPND are the address and phone number on the document, which - unsurprisingly - just happen to be also used by SPND.

Helpfully for us, the contract is written on an IAP letterhead, and so it has the IAP's address, phone and fax numbers on each page. Here's an example:

Let's start with that address: Mojdeh Street (خیابان مژده, also transliterated as Mozhdeh Street), off the Shahid Babaii Highway in Tehran's north-east. That small suburban street just happens to house a well-known facility owned by SPND, which was first revealed as a military nuclear research location in 2004 by an Iranian dissident group.

And a nice close-up image of the SPND site at Mojdeh Street, courtesy of Google:

Check out that enormous wall at the left side of the facility! That's totally normal and not at all designed to shield SPND from visual scrutiny by the neighbouring apartments. Probably doesn't stop the spy pigeons though.

Helpfully for us, you'll note that the Mojdeh Street address is on that documentation too, along with explicit references to the fact that the Mojdeh site is owned by SPND.

So what is this contract between IAP and the Islamic Azad University all about?

SPND has a few desperate requirements: money, legitimacy, and access to foreign technology. For SPND, an agreement of cooperation with Islamic Azad University fulfils each of these needs. Amongst other things, the agreement binds IAP/SPND and IAU to collaborate on research projects of mutual interest; mandates that IAP/SPND help procure and fit out IAU laboratories with nuclear-related equipment; and enables IAP/SPND to provide employment to IAU postgraduate students. Through each of these avenues, SPND can hide behind the name of IAU in order to get funding and to procure foreign tech.

We know this because SPND has done it all before with a different university. In the early 2000s, when the IAP wanted to appear respectable, it borrowed the name of another civilian research institution, the Iran University of Science and Technology (IUST - دانشگاه علم و صنعت ایران). As an example, here's a research paper authored by the martyred scientist Masoud Alimohammadi (مسعود علیمحمدی), a key member of Iran's pre-2003 nuclear weapons programme, where he describes his affiliation as the "Institute of Applied Physics, IUST": 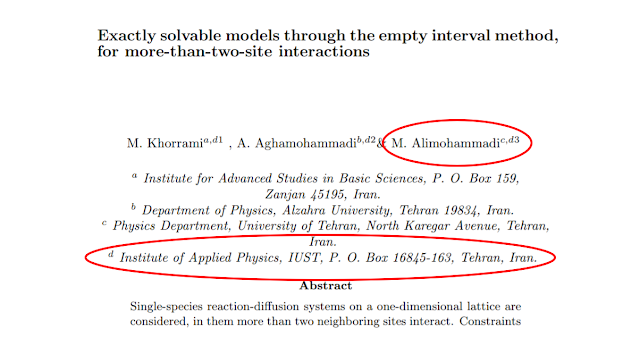 The IAP/SPND and IUST might actually still retain some friendly connections, or it could just be that the IAP likes to continue to pretend that it is affiliated with IUST. The IAP's stamp, which we saw on the contract with IAU, even has a version of the IUST torch-and-cog logo on it: 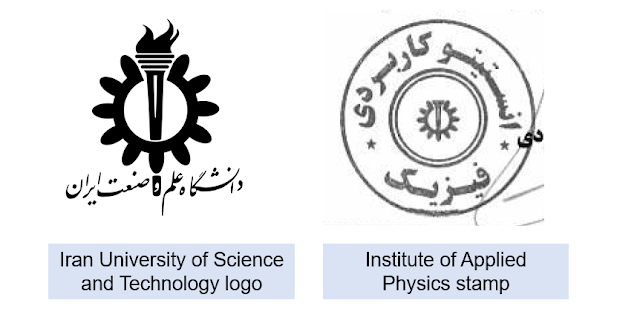 One contract, one big risk.

With Washington clamping down hard with sanctions on entities involved in Iran's military and nuclear programmes, IAU is playing a very dangerous game by entering into such a close relationship with IAP/SPND. Because of that memorandum of cooperation between IAU and SPND - which is now openly available for all to scrutinize - thousands of IAU students and graduates could have their opportunities to study or work abroad jeopardized.

We're sure that IAU will want to avoid being formally designated as an entity supporting SPND's nuclear weapon-related research, and we hope that this agreement between IAU and SPND will be severed as soon as possible.

There's just one hitch with that. We suspect that an important figure behind the IAU-SPND hook-up is Amad Man and aspiring boss of SPND Dr Mohammad Mehdi Tehranchi (محمدمهدی طهرانچی), who became head of IAU's Central Tehran branch shortly after the IAU-SPND contract was signed. He's since risen to become president of the entirety of the Islamic Azad University system, overseeing tens of thousands of students across Iran.

With Tehranchi in charge, we think that the IAU-SPND connection is only going to become closer, unless IAU's students vote with their feet and wallets and shut down SPND's activities on campus.