When we recently saw that SPND had stuck an IAP sticker on one of their projects, we thought it was a bit of a joke. Surely, we thought, SPND wouldn't be so stupid as to revive the brand name of the IAP - an acronym standing for the Institute of Applied Physics (انستیتو فیزیک کاربردی) - when that so-called institute had long been outed as a front organization for Iran's pre-2003 nuclear weapons programme.

As it turns out, SPND is stupider than we thought. The IAP is back! Indeed, our research reveals that SPND has revived the IAP brand, and has been using it for at least the past three years. And, most disturbingly, that SPND has used the cover of the IAP to infiltrate Iran's biggest civilian university, Islamic Azad.

We've uncovered previously undisclosed documents that show that in 2016, SPND used the IAP as a nom-de-plume to sign a memorandum of cooperation with Iran's oldest and most prestigious private university, the Islamic Azad University Central Tehran Branch (دانشگاه آزاد واحد تهران مرکزی).

You can download these documents for yourself here. For those of you whose Farsi is a bit rusty, we'll explain later what they entail.

First, though, a bit of history on the IAP.

What is the Institute for Applied Physics?

The deliberately benign name of this so-called Institute obscures the fact that the IAP was actually a covert front for procurement and R&D activities for Iran's pre-2003 nuclear weapons programme, known as AMAD. The IAP was a fig-leaf: the only institute that the members of the IAP worked for was AMAD, and then AMAD's successor research organizations within Iran's Ministry of Defence, all of which aimed to continue AMAD's work, minus the most sensitive parts.

Iran virtually admitted as much in 2004, when it told the International Atomic Energy Agency (IAEA) that the IAP had been located at a site in Tehran known as Lavizan-Shian, which had housed nuclear research efforts by Iran's military. Unfortunately, at that time Iran had also just bulldozed the entire Lavizan-Shian site to bare dirt - and then built a municipal park on top of it - preventing the IAEA from visiting to see what the IAP actually was and what it had done.

By 2011, the IAP was comprehensively outed as a sham that Iran had used as part of its former nuclear weapons programme. In November of that year, the International Atomic Energy Agency released their substantive assessment of the military aspects of Iran's nuclear programme. Clear as day, on page five of that report, the IAEA states that the Institute for Applied Physics was part of the organizational structure responsible for Iran's former nuclear weapons programme. Here it is: 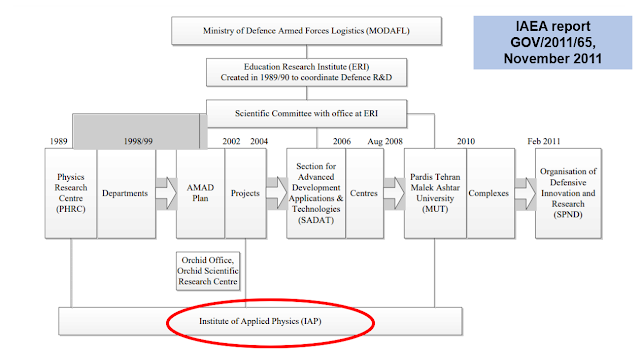 Given that the European Union Council also called out the IAP in 2011 for its past work on "military applications of the Iranian nuclear programme", we'd assumed that Iran had binned the IAP name, as it had been well and truly blown as a cover. And we haven't seen any use of the IAP brand since (apart from occasional references in old research papers) until that magic bus rolled into town.

Now it’s clear that they’ve gone further – and are putting the Islamic Azad University Central Tehran Branch (دانشگاه آزاد واحد تهران مرکزی) at risk. Those memorandum of cooperation documents that we revealed earlier show that the IAP is back - and confirm that it is run by SPND. We’ll explain exactly how we know this in our next post. Stay tuned for part II!