We are shocked and appalled to let you know we have learned that Iran's SPND (سازمان پژوهش و نوآوری دفاعی) organization is involved in a new scam designed to separate the foolish from their money. Perish the thought!

Some SPND old timers have established a new venture, the Regenerative Nanotech Company (شرکت نانو فناوران احیاگر). You can visit their website here, in case they stop paying the server bills...

Regenerative Nanotech is selling something called "hydrogen enhanced water", with purported health benefits. This enhanced water allegedly makes concrete stronger, which is a sure sign that you should be drinking as much of it as possible.

This product is snake oil, pure and simple. And it doesn't surprise us that the company is fully owned by four guys with longstanding ties to SPND. Regenerative Nanotech's four owners are all old hands of Malek Ashtar University's Physics Department, which has long functioned as a cut-out for SPND and its predecessor organizations' research activities in the nuclear field.

The owners of this company are:

These guys' connections to Malek Ashtar are not at all hidden. Kheirollah Mohammadi and Eskandar Asadi Amirabadi list the affiliation on their Researchgate accounts; Hossein Targholizadeh has published academic papers under the MUT banner. Azimirad is out and proud as a professor of physics at MUT.

Their work for SPND is a little harder to dig up. Here's Kheirollah Mohammadi testing out an IAP-100 dosimetry device manufactured by SPND's Institute for Applied Physics (انستیتو فیزیک کاربردی), or IAP. Here's Rouhollah Azimirad publishing under the affiliation of MUT, but listing a postcode (1668943171) used by SPND. Here's an article of Eskander Asadi Amirabadi's that was co-authored with SPND's very own Gholamreza Etaati.

If that wasn't enough, in 2014, all of these men were listed by an Iranian dissident group as alleged members of the SPND organization.

This is how all of these connections look: 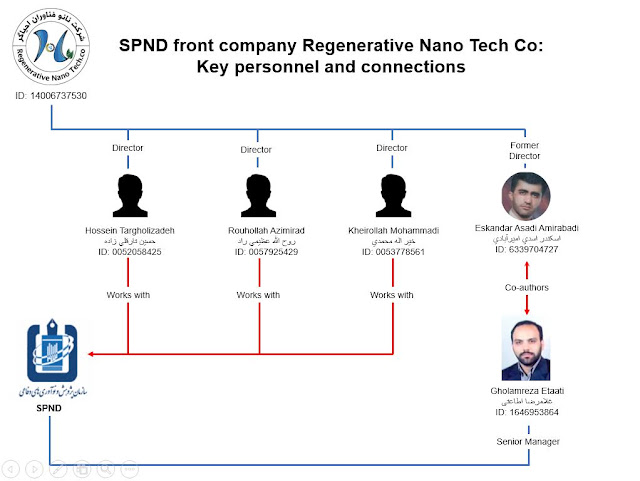 We'd strongly advise you to avoid Regenerative Nanotech Co and their nano-water. Here are a bunch of things we'd rather drink:

1. The run-off from the AMAD detonation chamber at Parchin.

2. Deuterium oxide, aka heavy water. Did you know it helps fight cancer and AIDS?

3. Mohsen Fakhrizadeh's tears from when he found out about the theft of the Atomic Archive.

4. A vial of the human growth hormone smuggled out of the US by SPND's Masoud Soleimani.

5. The water used to blow up one of Saeed Borji's giant steel balls.

9. All the pomegranate juice it took us to think of this list.

See you next time!