When Iran Redline gets a taste for some easy sport we go looking for SPND front companies. SPND - the Iranian military research organization with a penchant for nuclear weapons - relies on front companies to procure sensitive equipment; raise revenue; and as hollow logs to squirrel away ill-gotten cash.

So we like to reveal these companies whenever we can!

That's where we can help.

KPSing it in the family

Our analysis of Iranian business records has revealed that Ervin Parto Caspian is closely tied to a notorious SPND front company named Kimiya Pakhsh Shargh (KPS or کیمیا پخش شرق, national ID 10102179854), which masquerades as a supplier of radiation-related materials and equipment for medical and industrial use.

We're frankly rather stunned that KPS is apparently still around, given that they've been involved in procuring equipment with nuclear weapon-relevant utility for at least the past dozen years. Yet it's only been in the past six months that KPS has been publicly designated by the US Treasury for being controlled by SPND.

Forgive us while we briefly relive some of KPS's greatest hits. KPS started its public life in about 2001 as one of the covert procurement outfits run by AMAD man Seyyed Shamsuddin Borborudi (سیدشمس‌الدین بربرودی or سید شمس الدين بربرودی), the head of purchasing and logistics for the AMAD pre-2003 nuclear weapons program.

AMAD halted in late 2003, but KPS didn't. In 2007, according to German court documents, KPS procured two high-speed streak cameras from a Russian manufacturer, Bifo, with specifications perfectly suited for conducting diagnostic tests on nuclear weapon components. (Unhelpfully, KPS's name was slightly mistransliterated by the court as Kimya Pakhsh Sharg Co. Ltd., thus thwarting any due diligence Googling about the company for the next twelve years). There's little doubt in our minds that these Bifo streak cameras were destined for SPND (known as SADAT at that time), and the cameras are probably still being used at one of SPND's secret explosive test facilities.

KPS was always something of a family affair. Borborudi even had his squeeze Parisa Nasiri (پریسا نصیری, national ID 0061381421) installed on the board of directors of KPS. It won't surprise you to learn that while Parisa Nasiri is no longer a KPS director, she's allegedly been employed by SPND.

When Borborudi was tapped to join the Atomic Energy Organization of Iran (AEOI) during the brief AEOI chairmanship of his Amad buddy Fereidoun Abbasi-Davani (فریدون عباسی دوانی), KPS took on some new blood. Enter Mahdi Masoumian (aka Mehdi Masoumian or مهدی معصومیان, national ID 0491942168), an SPND employee who as of 2019 is still CEO of KPS. Indeed, it was Masoumian who was one of two KPS employees designated by the US Treasury for his role in running KPS's activities on behalf of SPND.

The second of those employees was KPS's commercial director, young gun Mohammad Hossein Haghighian (محمد حسین حقیقیان, national ID 1270029495), a nuclear engineer from Islamic Azad University. We feel a bit sorry for Haghighian, given that his KPS commercial office colleague Shahnaz Aghadadashi (شهناز آقا داداشی) managed to dodge the long arm of the US, as did Mahdi Masoumian's probable kin Mansoureh Masoumian (منصوره معصومیان), who we know is another director of KPS.

What about that new front company?

Don't worry, there is a reason for all of this gratuitous name-dropping. We've been delving into Iranian business records and have discovered that virtually all of the KPS employees named above are also directors and shareholders of another Iranian company, Ervin Parto Caspian, that just so happens to share a Tehran landline number used by KPS.

Ervin Parto Caspian's business model is eerily similar to that of KPS. Incorporation documents from Ervin Parto Caspian that we've reviewed state the the company's objectives include "import and export of radioactive products, items and devices...and distribution and production of materials and sources of radiation with scientific, industrial and medical applications."

Same personnel, same phone number, same business.... hmmm. We'd say KPS and Evrin Parto Caspian are just about dead certain to share the same owner as well. So, on the basis of all those connections, we're going to call out Ervin Parto Caspian as an SPND front company.

Here's how it looks: 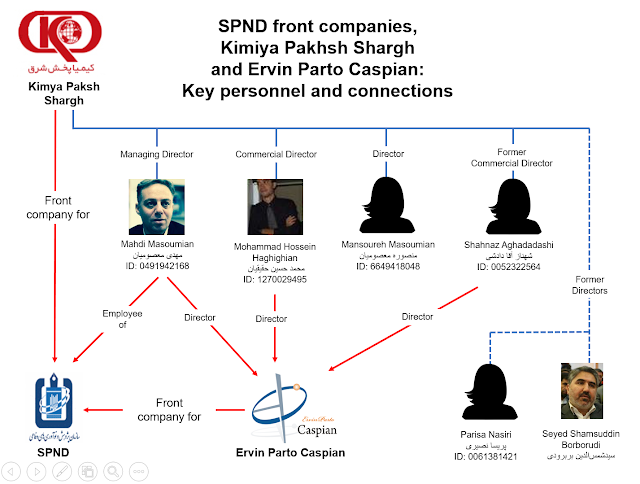 After all, it's either that or Masoumian and his buddies are secretly running a competitor to KPS that's siphoning business away from SPND - and that wouldn't be looked on kindly by SPND head Mohsen Fakhrizadeh.
Fakhrizadeh SPND fronts