If you've spent any time loitering around university bars (as Redline very well may have done), you'll know that life as a PhD student is pretty much the opposite of enjoyable. The pursuit of a doctorate might be a noble one, but PhD study usually also comes with a one-way ticket to self-loathing, depression, and inevitable alcoholism.

So imagine trying to write a PhD thesis while holding down a day job running Iran's liquid-fuelled missile program! And also having to run the occasional clandestine mission to North Korea to work on a top secret project.

But one Iranian is doing exactly that - Seyed Mirahmad Nooshin (سید میراحمد نوشین). Redline isn't sure whether Nooshin wants a drink (or wants more than one), but he definitely is running a missile programme, writing a PhD, and secretly helping the Norks build a giant rocket booster. And in this post we're going to take a closer look at Nooshin's work.

Nooshin was outed by the United States Treasury Department in January of last year as head of Iran's Shahid Hemmat Industrial Group (گروه صنایع شهید همت), which is responsible for producing for producing liquid-fuelled missiles like the Shahab-3. Before that, Nooshin had been working entirely in the shadows - which is the best way to operate when Iranian missile engineers have a habit of mysteriously exploding.

But even the most shadowy missile engineer has to bust out a publication every now and then if he has aspirations of gaining a doctorate. And you can find some of Nooshin's early missile research here - it's a 2005 paper on optimising (what else) a liquid-fuelled missile system.

In the decade since, though, Nooshin has largely quit hands on tinkering with Soviet-origin missile engines in favour of climbing the greasy ladder of middle missile management. Having been appointed as the head of SHIG, Nooshin is clearly doing well on that front. But there's always more work to do if one aspires to be head of the Aerospace Industries Organisation of Iran (سازمان صنایع هوافضا), which is one step above SHIG in the hierarchy of Iran's military-industrial complex.

And that's where Nooshin's PhD comes in. He's leaving behind the highs of sniffing unsymmetrical dimethyl hydrazine in the lab in order to sit in the big office finding synergies, creating efficiency dividends, adding value, strategic direction and every other buzzword that corporate management learning can teach.

As proof, here's an example of one of Nooshin's latest research papers: 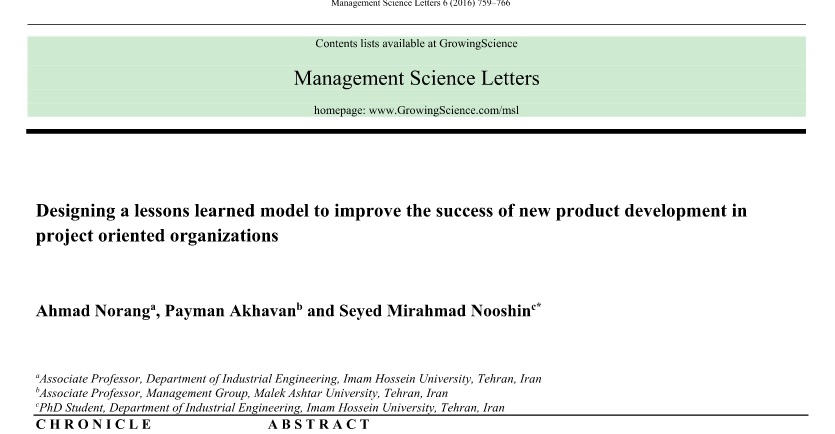 It's not all that boring for Mr Nooshin, fortunately. You'll note in the credits of that paper there that Nooshin is taking his PhD at the Industrial Engineering Department of Imam Hossein University (IHU) (دانشگاه امام حسین). That's an interesting - and revealing - nugget. IHU belongs to the Islamic Revolutionary Guards Corps (سپاه پاسداران), and not to the Ministry of Defence and Armed Forces Logistics (MODAFL) (وزارت دفاع و پشتیبانی نیروهای مسلح). MODAFL, which oversees the AIO and SHIG, has its own university - Malek Ashtar University (دانشگاه مالک اشتر). Malek Ashtar would be the logical place for a MODAFL employee like Nooshin to do a PhD.

So why is Nooshin hitching his wagon to the IRGC? Maybe he got a good PhD scholarship out of them. Or, more likely, Nooshin is an important link between MODAFL's and the IRGC's formerly separated missile endeavors.

It's the IRGC, you'll recall, who was responsible for running a top-secret solid-fuelled ICBM project, operating completely outside of MODAFL structure and reporting directly to Ayatollah Khamenei himself. But since the death of the projects leader, Hassan Tehrani Moghadam (حسن تهرانی مقدم), in a mysterious explosion, that IRGC programme has probably been brought into the MODAFL fold.

Anyhow. As well as being tight with the IRGC, Nooshin is also one of the key interlocutors between Iran and North Korea's missile programme. In 2016, the US Treasury stated that Nooshin had 'traveled to North Korea to work on an 80-ton rocket booster being developed by the North Korean government.' Nooshin, the Treasury said, had 'been critical to the development of the 80-ton reocket booster...[and] traveled to Pyongyang during contract negotiations.'

North Korea, by the way, is pretty much the worst partner in the world to try and run a secret rocket booster partnership with. While Iran manages to keep its missile tests semi-secret, Kim Jong Un prefers to mark every test of a new rocket with a full-blown Behind-the-Music style Korean Central News Agency Documentary That makes it kind of hard to deny to the world that there is actual missile collaboration going on between Pyongyang and Tehran, much less a specific project to develop a big rocket booster to help satellite launch vehicles (or ICBMs) to get aloft.

Anyway, if you're hanging out at Beijing airport anytime soon, keep an eye out for Mr Nooshin. He may well be embarking on an Air Koryo flight to go help the North Koreans tweak a rocket motor... or to help Pyongyang manage knowledge, find synergies, promote workflow and other stuff. Like a boss.
IRGC University