Why has SPND's annual budget quadrupled?

Iran Redline usually avoids anything to do with accounting, and is very happy that our shoestring budget pretty much takes care of itself.

But when we realized that Iran's national budget contained a specific line item for SPND (سپند) - the notorious defense research organization that houses expertise and technology from Iran's former nuclear weapons program - we just had to take a closer look. Even if that involved a bit of accounting.

It turns out that SPND is well-funded by the Iranian state - much more so that we had imagined - and that SPND's budget has skyrocketed over the past four years. In today's post, we can reveal just how much Tehran gives SPND to carry out its nefarious activities: almost USD $21 million per year.

But back to the numbers in a minute. Here's how we know just how much SPND is getting paid.

Every year in about December, Iran's President submits a budget bill for the forthcoming year to the country's parliament, the Majlis. And this bill is made public. The bill then gets fiddled with a bit as it then goes through the parliamentary process, but by and large the proposed spending figures in it remain intact. (Defense-related line items in these bills tend to get bigger, thanks to hardliners and hawks in the legislature who like spending money on the military.)

The most recent of these bills, for the Persian year 1399 (that's March 2020 to March 2021 for all you Gregorians), was released late last year, to much poring over by the nerdy Iran-watching community. We've read lots of very good reporting on recent bills, and particularly recommend the Institute for International Security Studies' piece, which outlines how Iranian defense entities are also able to access off-the-books money for their various programs outside the regular budget.

The 1398 budget attracted particular interest, with the big headline being that while the budgets for the IRGC and Iran's conventional armed forces didn't change much, one massive shift was that President Rouhani had proposed a fifty percent reduction to the budget of the Ministry of Defence and Armed Forces Logistics (MODAFL or وزارت دفاع و پشتیبانی نیروهای مسلح جمهوری اسلامی ایران). MODAFL is the logistics and industrial arm of Iran's defense program, and is responsible for everything from building ballistic missiles to trucking around military rations. MODAFL also happens to be the parent organization of SPND.

What the budget says about SPND

Indeed, it seems that SPND is a bit special when it comes to Tehran's spending priorities. And that's what some analysts missed in their initial reporting: not all of MODAFL lost out in the new budget, and SPND was actually a very big winner.

We've identified in the budget bill and subsequent Majlis-approved budget of the same year a specific line item for SPND, which shows that the organization's state funding allocation for 1398 (March 2019 to March 2020) was 837 billion rials, or nearly USD $20 million. Here's the proof:

That's almost a 70 percent increase from the year before, where the budget for SPND was a comparatively meager 500 billion rials (about USD $12 million): 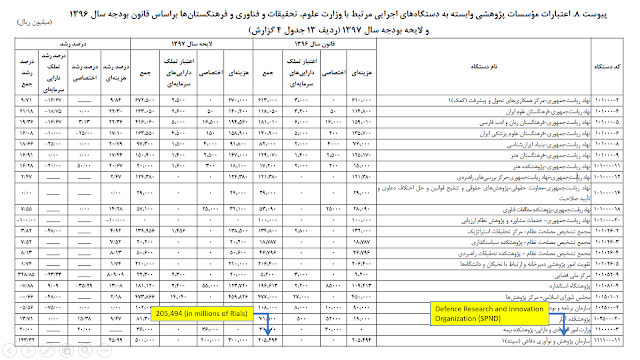 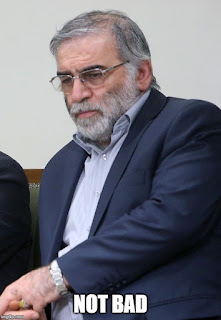 We're not quite sure why SPND was given such a windfall gain, particularly against a backdrop of such harsh cuts to MODAFL, and SPND's general bumbling and lack of deliverables. But we can make some educated assessments as to why this is. Here are a couple of them.

First, this budget bonanza means that SPND has powerful patrons in the Iranian government. We'll quote from the IISS study mentioned earlier:

Iranian budget planning is really the result of factional power brokering and horse-trading rather than a response to the constituents it purports to represent. The ability to commandeer a share of the defense budget should be seen as a barometer for the level of influence or lack thereof of different bodies and institutions.

A seventy percent gain in one year sure as hell shows a "level of influence".

Second, the budget gain means that the SPND brand still isn't as toxic as it should be, despite the organization's massive security failure in losing the so-called Atomic Archive; public exposure of SPND's senior leadership and their private business ventures; and various other security blunders by the organization.

Iran Redline wonders if the workers are seeing any of this extra money in the form of fair pay, or whether it will remain in the hands of the few “influencers”.

Is there any good news? A little bit. It may be the case that SPND isn't uniquely popular inside MODAFL - rather, that SPND was just riding on a wave of Iranian budgetary enthusiasm for the country's military research institutions.

Here's some evidence for that hypothesis. 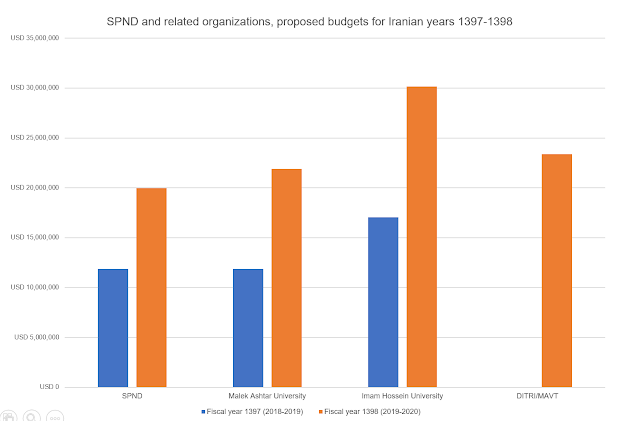 And here's the bit we love. Mohsen Fakhrizadeh's main rival within the MODAFL research establishment, the Defence Industries Training and Research Institute (MAVT aka DITRI aka DIRTI aka TRIDI aka موسسه آموزشی و تحقیقاتی صنایع دفاعی), still had a bigger budget than SPND. 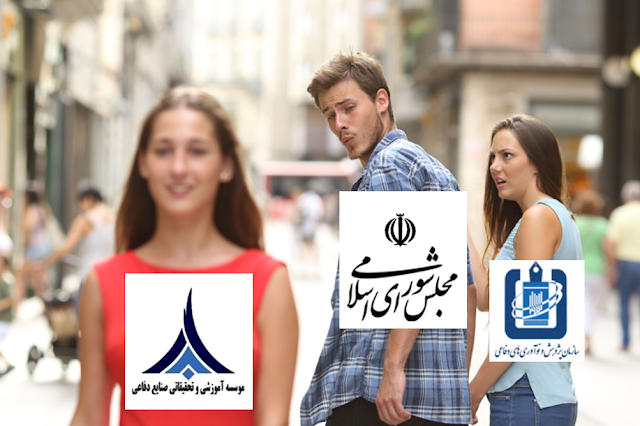