It's that time of year when the Redline team usually gets a bit misty-eyed and indulges in some reminiscing about the year gone past. Not this year though! Instead, we're focused on 2018 and making sure that we're ready to keep delivering insights into the murkier aspects of Iran's nuclear program.

So what are we expecting to happen next year on that front? Well, Team Redline is very much hoping that Iran keeps sticking to its end of the Joint Comprehensive Plan of Action (JCPOA), the landmark nuclear deal negotiated in 2015. The odds of that happening we think are better than even.

Buts it's still best to me pessimistic. What we can be even more assured of is that elements within Iran's military and Revolutionary Guards (IRGC) will keep working on developing capabilities that veer a little too closely to the limits of what is permitted under the JCPOA - and indeed perhaps a couple of projects that cross the line.

Here's where we'll be watching especially closely in 2018.

If Iran ever builds a nuke it's most likely going to be stuck on the end of a ballistic missile. So we like to keep an eye on developments across Iran's missile sector - and particularly because Iran's leadership has made it very clear that they don't intend to stop making missiles.

So where are we watching on the missile front? An IRGC organisation known as the Aerospace Force's Self-Sufficiency Jihad Organisation (SSJO)(سازمان جهاد خودکفایی) capped off a big 2017 by getting designated by the US State Department, who pinged the SSJO for its ongoing work on ballistic missiles. The SSJO first "came to light" back in 2011 for its work on a top-secret ICBM project, which it probably hasn't let go of. And we also bet that they have some interesting re-entry vehicles and warheads under development at the SSJO's home base.

This is something that is explicitly prohibited under the terms of the JCPOA, so we doubt that too many Iranian researchers will be mucking around designing hypothetical nuclear warheads. Still, we'll be scrutinising the Physics Department of the IRGC's Imam Hossein University (دانشگاه امام حسین), which has always seemed like a weird capability for the IRGC to maintain - and a natural home for covert development of weapons-relevant capabilities.

Iran's military experts in radiation safety are some of Redline's favorite punch bags - they're basically like the Ghostbusters of Iran's covert nuclear activities, zipping around in a crap old car to vacuum up traces of nuclear material. In their downtime they'll be hanging out at SPND's headquarters or its old campus on Mojdeh Street (خیابان مژده), probably doing the accounts of "the Novin Medical Radiation Institute to work out how many Rials they're wringing out of Iranian cancer patients. Let's hope in 2018 they'll be doing enough business so as not to be tempted to back in to the old game of secret nuclear weapon development.

If 2017 proved anything, it's that cyber security is so hot right now. And those in Iran's military-nuclear complex won't have failed to notice that - in 2018, there's definitely going to be money to be made in cyber. Just ask Mohsen Fakhrizadeh (محسن فخریزاده), who's been siphoning off government money to his family's cyber security business for at least the past few years. 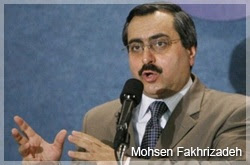 We expect that in 2018 the Fakhrizadeh family will be at the front of the queue to suckle on Iran's cyber teat. Indeed, Redline has been pleased to note that Fakhrizadeh's sons Hani, Mehdi and Hamed have been busy registering a bunch of new domain names:

That's the spirit lads! Get that cyber cash flowing.

One of the often-overlooked aspects of nuclear weapon development is the process of working out exactly how your going to use the weapons - who'll get to have their finger on the button, where they'll be stored, and that sort of thing. It's not super exciting stuff, but someone's got to do it if you want to have a credible deterrent. The upside is that you can do this stuff on the super down low - do your job well and there's little chance that an adversary will be able to to detect your hand-drawn scribbled flow-charts inside a classified notebook.

Anyway, that's our take for the coming year. In the meantime, Redline wishes you all the best for the merry stretch between now and Nowrouz.